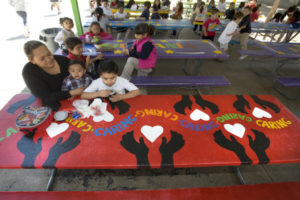 SANTA ANA – There’s a reason Susan Kadota hauls her son from their Huntington Beach home every morning to one of the most impoverished areas in the county for schooling.

The green-trimmed old craftsman home along one of Santa Ana’s busiest corridors is the gateway to El Sol Science and Arts Academy, where about 71 percent of the students are on reduced or free lunches and the majority are the children of foreign-born parents.

It may seem the odds are stacked against success for the charter school, which has had a colorfully tumultuous history after its 2001 debut.

However, a closer look shows that El Sol is one of the best schools in the county.

It’s a dual immersion publicly chartered school where children are fully bilingual and bi-literate in English and Spanish by the fourth grade and math test scores are on par with Irvine schools. Last year, 85.2 percent of El Sol’s students passed state math tests. At Irvine Unified, with some of the top academic schools in the county, 85.5 percent of its students passed.

This spring, state officials named the preschool-through-eighth grade school one of its 2010 California Distinguished Schools, the state’s top award for individual schools that is based largely on test scores.

Last year, fewer than 4 percent of all public schools in the state were honored.

Kadota didn’t look much at the numbers, she said. The 45-year-old who hop-scotched the world as a child, attending school in São Paulo, wanted her children to acquire a solid education paired with the exposure to a different language and culture. Her children are of Japanese and European origin and more than 95 percent of El Sol’s student population is Latino.

She was driven to bring her 7-year-old son and her kindergarten-bound daughter to El Sol because of its novel approach to teaching, she said.

“Everyone is in it to support the students in a well-thought-out, holistic way,” Kadota said.

The school is unique in that it believes that a child’s success at school is tied to the overall well-being and health of the family and community, said Monique Daviss, the school’s executive director.

“If the family is strong and healthy, the parents will be better equipped to help their children,” Daviss said.

That’s why the school offers a plethora of services to its students’ families. At its core is an afterschool program called the Family and Children Learning Center, where about a third of its 600 families are assigned a case manager who determines each family’s particular need and benefit qualifications.

Volunteer nurses offer a free comprehensive health assessment to each family. In addition, family members have access to other services such as an employment and income evaluation, English and U.S. citizenship classes, as well as legal services. All are at El Sol.

The school primarily serves a low-income population where the surrounding neighborhood had about 22 percent of families below the poverty level — the highest in the county, according to 2000 census figures. About 80 percent of the students are children of foreign-born parents — either legal immigrants or people who are in the country illegally, Daviss said. El Sol—like other public schools and publicly chartered schools—are not required to and don’t keep track of each family’s legal status.

All of the 200 families — regardless of legal immigration status — have access to the Family and Children Learning Center and its services.

While El Sol receives state and federal funding to help run its school, it uses money from private grants and donations — not taxpayer dollars — for its extra programs, Daviss said. Its strong partnership with The Merage Foundations, based in Newport Beach, has given the school access to an extensive network of influential donors and organizations that have funneled money or other support into the extra programs and services.

The school has teamed up with the Public Law Center, Latino Health Access, Children & Families Commission of Orange County, Wells Fargo Bank and a network of service providers and other organizations to make it happen.

Once a month, Second Harvest Food Bank parks in front of the school, handing out free food to students’ families and those in the surrounding neighborhood.

“First and foremost, we’re a school but the fact that we do all of these other things is based in our belief that a healthy family and a healthy community is an important component of a strong educational experience for the student,” Daviss said. “We’re looking out for the whole child.”

In September the free health check-ups will expand to every El Sol family and eventually to the school’s neighboring community. Eventually, the hope is that a full-fledged clinic will be available at the school site.

MORE THAN A SCHOOL

Parents are the first to say that El Sol is not just a school but an extension of their family — most importantly a resource — for not only the students and their families but the entire community.

It’s a place where Benedicta Navarette and other parents are not only welcome, but encouraged to bring and share a meal with their children during lunchtime at the school.

It’s an opportunity for Alicia Rubio and her daughter, in the first grade, to get a free health check up and advice on how to prepare healthy meals for the family.

It’s a saving grace for Sandra Herrera, who had nothing in her pantry to feed her children this spring before her son’s teacher insisted on giving her $50 for food. School officials eventually connected her with a social worker who said her children qualified for food stamps, said Sara Flores, coordinator of the Family and Children Learning Center.

“If the main worry is to provide food for the table, helping with homework is not a priority,” Flores said.

Often, she said, if the child is not doing well academically it’s a good indicator that there’s some sort of stress at home. That’s when she and other school staff and teachers step in, attempting to alleviate whatever situation so the child can concentrate on learning.

Herrera said she feels so indebted to the school that she’s become a part-time volunteer, putting in well above the 20 hours the school asks of each parent to give back to the school.

The school’s team teaching and rigorous curriculum, paired with its holistic approach to learning and community support has helped the school rise from a low-performing school to one of the top four schools in the city, school officials said.

In the last few years, El Sol has received local and even nation-wide acclaim for its success. Families from throughout the county clamber every year to get their child into El Sol’s preschool or kindergarten classes. Even after a lottery, the school has a lengthy waiting list.

It wasn’t always this way.

Soon after El Sol’s opening in 2001 the school was in financial turmoil, borrowing $2.4 million from Santa Ana Unified to buy its property. But school officials couldn’t find a way to pay back the loan. The school eventually turned over the property it sits on to Santa Ana Unified, becoming more dependent on the district than the usual charter school. Around the same time about half the school’s parents, teachers and principal left and started their own school across the street, called Orange County Educational Arts Academy.

She voted in favor of the school’s charter 10 years ago, she said, because it was a different time in the district —with overcrowded schools and a year-round schedule.

For years, El Sol went through growing pains. That’s a departure from today. Yamagata-Noji said they rarely rely on the district.

She pointed to Merage Foundations’ Executive Director Marshall Kaplan’s involvement as one of the school’s turning points.

“I think Marshall Kaplan has been a Godsend to El Sol,” Yamagata-Noji said.

Kaplan, an East Coast native who battled poverty alongside Bobby Kennedy and drafted urban policy for President Jimmy Carter’s administration, came into the fray in 2005 and is now the school’s biggest cheerleader.

The 75-year-old Jewish man dressed up as Santa Claus during Christmas time for the last two years to give toys to kids at El Sol and the neighboring community.

He struggles to hold back his enthusiasm when he speaks of the school.

“Every time I get depressed about the world I literally go out to El Sol and talk to the kids,” he said. “The way they focus on family there is unique.”

Kaplan, whose grandfather emigrated from Russia and father from England, said it’s the school’s strong leadership and high expectations for the children and families that’s the key to its success. The school breaks the notion that Latino immigrants don’t value education, he said.

El Sol has become something of an obsession for Kaplan, who actively connects the school to donors and a network of groups who have the money, power and willingness to help. He has high aspirations for the school on Broadway Avenue.

“I want El Sol to be the best school in the country and best model for immigrant kids who start off with limited opportunities,” he said. “My dream with El Sol is that it become a model that can be replicable in other areas in the country.”