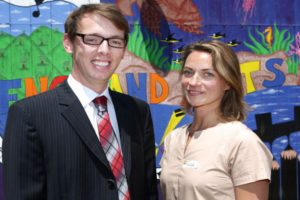 As dignitaries’ speeches wafted on the warm, summer air, the sounds of the smallest VIPs played out in the background. Students of El Sol Science and Arts Academy, partying in their classrooms and romping through the schoolyards, clearly couldn’t contain their youthful energy. Their laughter and whoops of joy occasionally interrupted the groundbreaking ceremonies for a new addition to the 2.8-acre Santa Ana campus.

The charter school for preschool through eighth grade continues to build on its success: In 2010 El Sol was named a California Distinguished School, in 2011 it received a Title I Academic Achievement Award, and it was recently highlighted in a presentation to a committee of the National Academy of Sciences.

“The theme for today is that they’ve demonstrated a tremendous academic achievement, and we want a campus that meets that same level,” executive director Monique Daviss said.

El Sol will expand to include a two-story building with 12 classrooms and a separate 4,000-square-foot Wellness Center that will serve families of students.

“Sometimes good ideas don’t flourish but that’s not the case here,” Santa Ana Councilman Vincent Sarmiento said. “It’s good to see bricks and mortar … and you can certainly count on the city for its support,” he said.

El Sol serves a low-income population but it has friends in high places, including a partnership with the Merage Foundations in Newport Beach and others. “We’ve been big fans of

El Sol and the work it’s done,” said Vicki Ueberroth Booth, president of the Ueberroth Family Foundation. “It’s the curriculum that’s innovative and the family involvement and the creative partnerships. It’s a solution for many communities, and I

look forward to seeing you all at the grand opening,” she said.