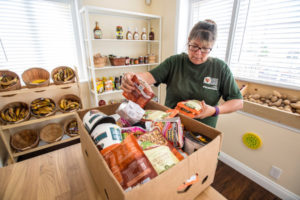 A cheery food pantry nestled at the back of a renovated older home, Mercado El Sol carries an array of canned goods, produce and meat and dairy products. But the cozy spot near downtown Santa Ana is set up to provide more than just nutritious food in the poor neighborhood it serves: Its aim is to offer patrons measures of compassion and respect.

Visitors can come in during a scheduled appointment and select what they want or need to fill up to two grocery bags rather than stand in line and wait to be handed a bag of food that someone else packed.

No food is bad food when in need, but the experience at Mercado El Sol is more like going shopping, only without a monetary transaction. Much of the food is rescued from grocery retailers that provide overstock items and products at their sell-by dates to Second Harvest Food Bank of Orange County.

Other items come from food drives and community donations to Second Harvest, the largest food bank in Orange County and part of the nationwide Feeding America network of food banks.

Second Harvest runs Mercado El Sol in partnership with the El Sol Science & Arts Academy public charter school, its second school-affiliated permanent food pantry in the county. El Sol school holds a long-term lease on the house where the pantry is located at the corner of Broadway and 10th Street, which once served as a law firm’s offices.

Second Harvest envisions the food pantries as key to its five-year strategic plan adopted last year to increase the number of meals it serves annually from the current 20 million to 30 million by 2021. Second Harvest also delivers food through 24 mobile pantry locations, a number it hopes to double by 2021.

The number of county residents struggling with food insecurity is down from 10.9 percent of individuals in last year’s survey to 10.1 percent, or one in 10 people. For children under 18, the drop went from 19.3 percent at risk of missing meals to 17.9 percent, or one in 6 youngsters, the report indicates.

But continuing financial struggles and higher cost of living has created a weekly food budget shortfall of $19.72 per person, up from $18.70 previously, according to Map the Meal Gap 2017.

“The economy has improved, but costs of living for housing, medical expenses and other necessities are rapidly outpacing any progress many of our working families are making,” Nicole Suydam, chief executive officer of the Irvine-based Second Harvest Food Bank of Orange County, said in reference to the Meal Gap study.

“It’s also an extremely challenging situation for people living on fixed incomes, like seniors and those who are disabled.”

Operation of the Mercado El Sol food pantry, open two days a week, replaced a once-a-month food distribution at El Sol school for the nearby community.

Esperanza Ochoa, 71, used to come to the monthly food distribution at El Sol to supplement meals she cooks for her husband and adult daughter. Now she visits the Mercado El Sol food pantry on Wednesdays, bringing along two cloth bags and a small wire cart the six blocks from her home to an early afternoon appointment last month.

Ochoa doesn’t have children in her household who attend the school, but she is an example of how the Second Harvest food pantries reach the surrounding community. She is among the 5 percent of Mercado El Sol patrons who are senior citizens. And at least 10 percent of the more than 800 households registered with the food pantry are headed by seniors, according to Second Harvest. Fewer than 200 of the households served have children attending El Sol school.

“I like this one better,” Ochoa said, comparing her weekly “shopping” at Mercado El Sol to the monthly food distribution on campus. “There wasn’t meat over there.”

It is not a walk-up operation. Visitors must register first and schedule appointments. So far, Second Harvest has registered 700 families at Mercado El Sol. Nobody in need is turned away.

Second Harvest hopes to open four more permanent pantries, one a year over the next four years, in neighborhoods whose residents need food assistance, using such indicators as schools where high percentages of students receive free or reduced-price breakfast and lunch and Orange County United Way’s financial stability instability heat map from the 2017 Community Indicators report.

“The food is available, it’s just building our capacity to expand,” Suydam said.

The future pantries will be what Second Harvest calls “community focused” meaning they would be housed, like Mercado El Sol, outside school campuses. Future sites could include a health clinic or a family resource center. The house where Mercado El Sol is located also hosts a Share Our Selves health clinic.

“It has so much to do with access, being able to access food when needed,” Suydam said. “We targeted areas where we knew the need was high.

Making that access to nutritious, high-quality food a dignified experience is a priority, she added.

“We like to coin what we’re doing as compassionate service: You don’t feel like you’re getting a handout.”

Even with the donated food, it takes $60,000 annually to operate Mercado El Sol, which includes the cost of delivering the food to the site. Fundraising and grants covered the startup cost of $30,000 to renovate the space for the pantry and underpin ongoing expenses. The pantry can serve 600 families a week but not all families need to visit that often.

The first Second Harvest school-based pantry began operating in late 2015 on the campus of Lincoln School in Anaheim. Called the “Lion’s Den,” the Lincoln pantry is located in a converted storage room inside the school’s multipurpose center and is visited by about 70 families every weekday during the school year, said Tammie Ledesma, the school principal.

“It’s not just people from the area surrounding my school, but guests from other cities,” Ledesma said. “They have been very appreciative of the idea of being able to feed their families and the free-choice setup. It’s things they need instead of just providing items that we pre-select.”

Patrons show their gratitude by volunteering to help run the food pantries.

While deemed a great success, the Lion’s Den does not operate year-round. Permanent food pantries are another way for Second Harvest to provide an ongoing source of help in combating food insecurity when children are off from school, in addition to its weekday Kids Café program that provides summertime meals and after-school snacks at 48 locations around the county.

The stepped-up availability of food from grocery retailers and the food rescue program have eased what used to be a summer slump in food donations, Suydam said.

There was plenty of food stocked in the Mercado El Sol pantry for Ochoa to choose from on a June day.

Like everyone else, Ochoa had five minutes to select her items. That might not seem like a long time, but the regulars are familiar with how the 230-square-foot room is stocked and they know exactly what they want. A maximum of five shoppers are let in together, with a volunteer or a Second Harvest staff member serving as timekeeper with cellphone in hand.

The pantry is outfitted with gleaming commercial-sized refrigerated and freezer cases along one wall that held an abundance of meat products — chubs of ground turkey, whole frying hens, slabs of ground beef, packages of bacon. The yogurt selection offered brands like Chobani and Fage for Ochoa to choose from. There were one-gallon jugs of milk and about 50 cartons of eggs by the dozen.

Wooden bins and baskets along the other walls held bell peppers, cucumbers, zuccini and yellow squash, potatoes, mangos, oranges, apples and red onions. Dry goods included a variety of cereals, among the most popular foodstuffs; bottled and canned goods ranged from Sriracha hot sauce to cranberries.

Among the items Ochoa selected on her visit: a 2.4-pound package of ground beef that she planned to use for albondigas, a traditional Mexican meatball soup; cottage cheese, bread and eggs; and a bunch of celery to make a smoothie that she said helps her knee pain.

Many of the products available in the 230-square-foot pantry are organic, often priced beyond what Mercado El Sol patrons can afford.

“Right now we have organic milk. I wouldn’t be able to afford it,” said Julia Palacios, a mother of two El Sol students who is both a patron and a volunteer at the food pantry.

Palacios recalled an eight-ounce block of organic mozzarella cheese that she got at the pantry and later saw priced at $11.99 in a grocery store.

She said her family and others are able to eat healthier food, thanks to Mercado El Sol: “It’s a huge blessing. People have choice.”

Even food items that would be considered routine purchases can be a big deal to the families that patronize the Second Harvest food pantries.

Ledesma recalled the astonishment from one woman able to pick up a dozen eggs for her family when the Lion’s Den first opened.

“She told me, ‘Oh my gosh, I get to feed my family eggs and I haven’t been able to offer eggs in a long time because they are so expensive’,” Ledesma said, her voice thick with emotion at the memory.

“That brought tears to my eyes, because I’m thinking, eggs? I know they’re expensive but I don’t think of that as a luxury item. To hear that from them, I realized, OK, maybe it is.”